There’s something wonderful about flying. Even crammed into Economy on a fourteen-hour leg, I’m happy to sit there and watch the films and eat whatever I’m given. I love a window seat, gazing down at whatever we’re passing, but on some international flights you’re asked to lower the blinds, even during a daylight voyage, meaning you miss out on what’s below. A few airlines have external cameras so that you follow progress on your backseat screen but it’s not the same. 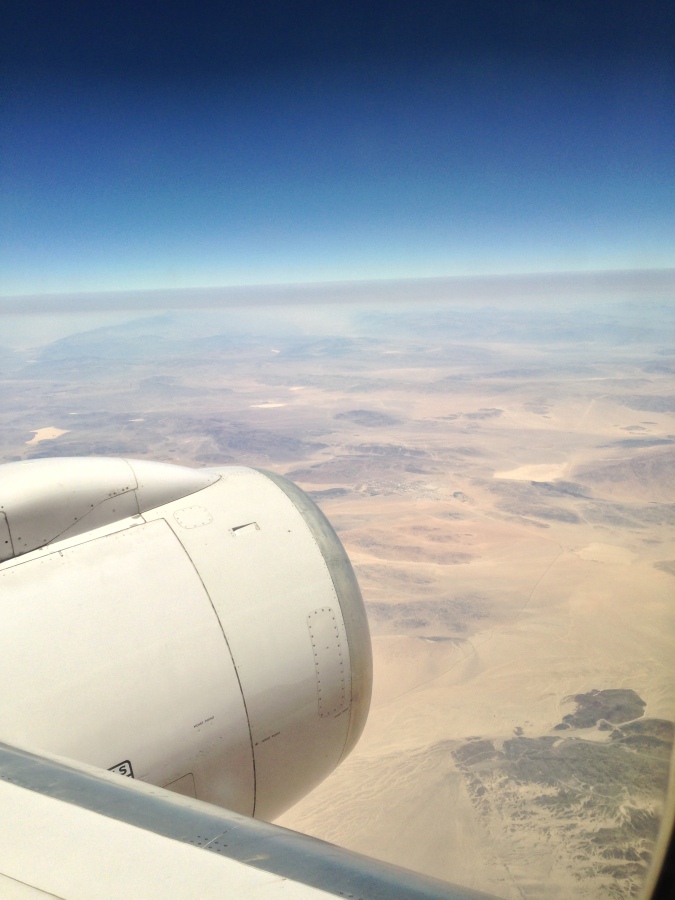 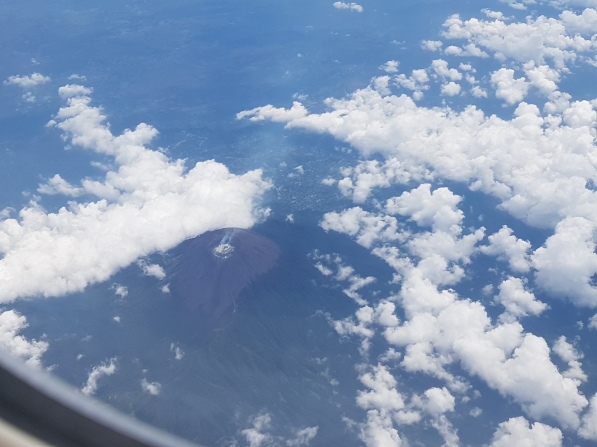 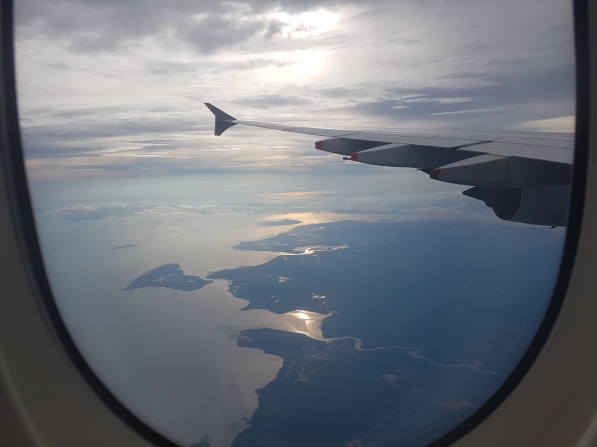 Looking down on the landscape below is always a pleasure. It’s fascinating to fly directly over a Javanese volcano or to see the length of the Grand Canyon or the radiating road patterns of a city like Tehran.  This is Google Earth and a geography lesson in real time. When I lived in Britain, holiday jaunts would invariably end by leaving clear Mediterranean skies and returning to a Britain that was lost to low cloud. Nothing to see here, folks. It made re-entry into normal life feel even more dismal. Occasionally you’d hit a cloudless day and look down and think, ‘Oh, there’s Brighton’ and somehow that made it better. 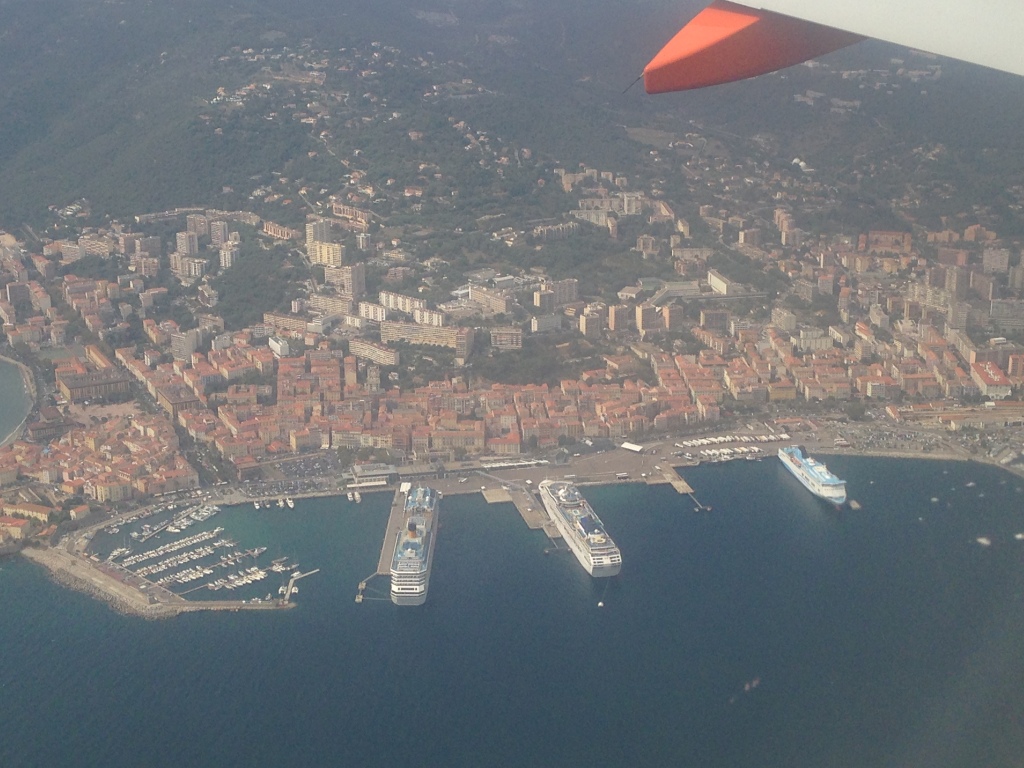 These are some of my most memorable looking-down experiences:

Coming into London: In the late 1980s, British Airways boasted that they’d never cancel a flight even if there was only one passenger. The evening flight I caught from Aberdeen to London, after a day’s interior design consultation with a client, was virtually that. There must have been three of us rattling around the Boeing 767. I remember being served smoked salmon sandwiches and generous slugs of wine. And while that felt very luxurious, we were soon stuck in a holding pattern over London, circling for what seemed hours. But boy, it was so beautiful – the sparkling lights, the brightness of Oxford Street and the sudden shimmer of the Thames and the lustre of the new Canary Wharf rising in Docklands. Stretched out in my seat I submitted to the twinkling landscape below, as magical as a dream, and London seemed like a glorious place.

Leaving London: I was feeling very emotional, leaving my life in London to start a new one in Sydney. Heathrow was smothered in November fog and our plane lifted off into thick cloud. When we were airborne, the cloud parted – just once – and I saw through the gap the little stretch of Kings Road that had been so important to me, where I’d worked and where I’d been so happy for so long. And then the gap closed again. It was no more than a fleeting glimpse but it felt as though Chelsea, and London itself, was bidding me farewell. 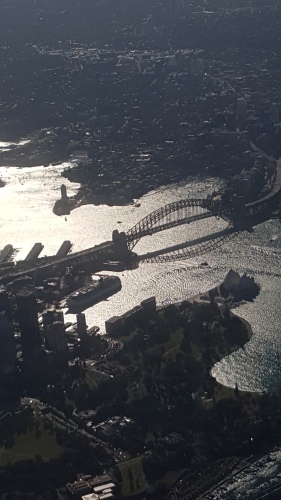 Flying into Sydney: The first time I saw Sydney was from the air. The long flight from San Francisco had been over endless ocean but then, nearing the coast, the plane banked as it prepared for the final descent. Suddenly there was the glint of a city and some cliffs and then Anthony pointed to a spit of land moored among turquoise-blue bays and gridded with orange-tiled roofs. “That’s Cronulla,” he said. I sometimes feel we invoked a spell. That afternoon we would walk on its beach and a few months later we would buy a house there, the one in which we still live some twenty two years later.

Flying into Leeds: This was my first trip back to Britain since moving to Australia. I’d endured a long KLM flight to Amsterdam, flying over Australia’s immense continent, where you look down, hour after hour, and see a red landscape that looks like another planet’s. I remember thinking how incredible it was that there were probably places down there on which no human had ever set foot. Now, as the British Midland jet edged past the Humber bridge and over the flatness of East Yorkshire, all brown tilled fields, I looked down and thought, in a slightly superior way: there’s not a piece of that land that hasn’t been walked on. But the emptiness of Australia never really captured my heart and now I love returning to Europe, and its countries so clearly trampled by history

Flying into Nice: I flew into Nice many times when I lived in London but there was a long gap between this flight and the last. The Emirates flight was virtually empty as many passengers had disembarked in Rome, and there was now a party atmosphere among the crew. They came around with chocolates – “Go on, take a couple more” – and there was a lot of laughter. The views from Dubai had been crystal clear, coastlines so sharp, mountains crisp, and the heel of Italy’s boot sparkling with reflections from the many greenhouses. We seemed to skim the roofs of the Vatican and were quickly up again and across Elba before swinging down to the great Bay of Angels and my beautiful Nice. It was years since I’d been to France. The bay was blue and beautiful, filled with tiny motorboats and large yachts with white sails, and the hills were covered with houses, their windows glinting in the morning sun. The Alps hovered in the distance like a mirage. I was struck by an intense feeling of coming home, a re-awakening and a remembering, which is present still each time I arrive in France. 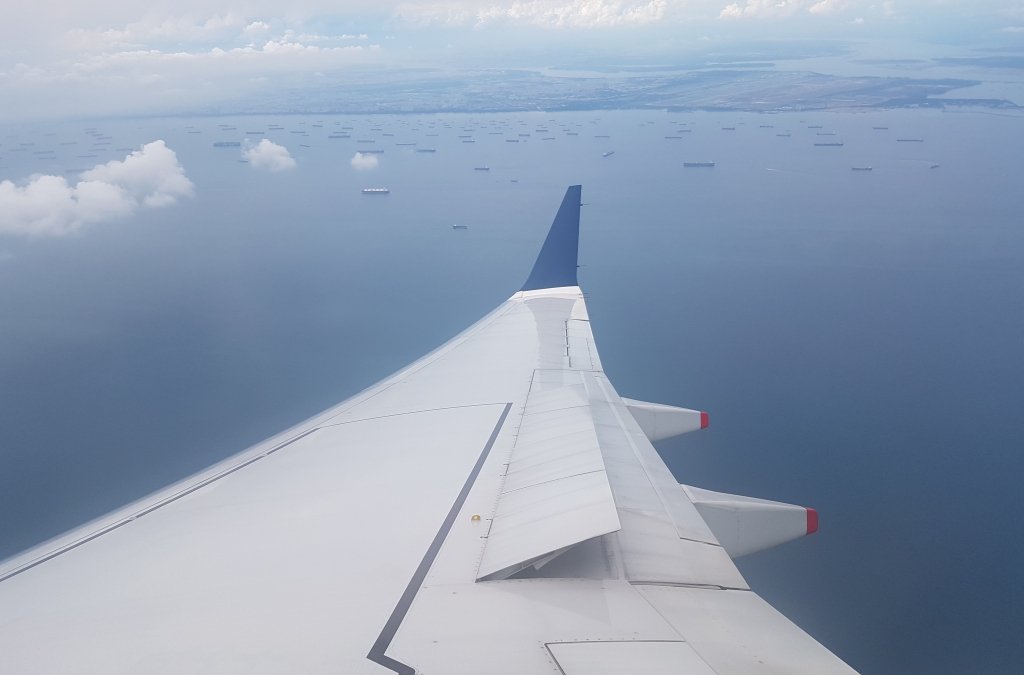 Flying into Singapore: I’ve flown Singapore Airlines more than any other airline, at least internationally.  The service is lovely, even when there’s turbulence, often in the bumpy air as we cross the Australian coastline, and encountering tropical storms nearer the Equator. On one trip, I was returning from Britain on my own. My father had died suddenly when I was in Chicago and although that had felt chaotic, re arranging flights and so on, the week or so I spent with my family after the funeral was uplifting and hardly sad at all. But on that flight home I became more emotional and I couldn’t concentrate on films, or sleep. The woman next to me was uncommunicative, too, unresponsive when I made a comment or had to squeeze past for the loo. In the last moments of the twelve hour flight, coming in to Singapore, she turned to me and said, “I’m sorry I haven’t been very talkative. I’ve been in England for my father’s funeral and this is the first chance I’ve had to really process everything.” “Me too,” I said.  And suddenly we were chatting and grieving together, which stopped only when there was a slight bump. “What was that?” I said, alarmed, before realising that we’d landed, the tiny bump of the wheels on tarmac so discreet, so typical of Singapore Airlines. I normally enjoy marvelling at the ships anchored in the Singapore Strait and the bright lights of the city’s towers but this time, looking out or looking down wasn’t nearly so important as looking back with someone on exactly the same route. As they say, it’s the journey that’s important, not the destination.

What are the memorable flights of your life? 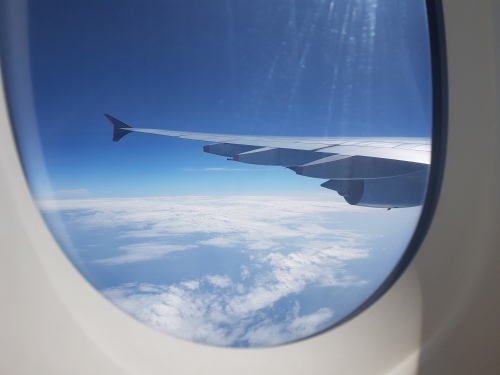 The Art of Blogging
Colin Bisset