When I was a boy in the 1960s, anything that said ‘Made in Japan’ meant cheap and nasty. We used to snigger at their cars, too. Japan meant plastic. And yet you can’t study the history of art without bumping into Japan.

Japanese woodcuts wowed Western artists when they became popular in the 1860s, especially in Paris. They affected everyone from Van Gogh to Monet. The refined lines of Japanese furniture influenced the Arts and Crafts movement as well as the Aesthetic and emerging Jugendstil movements. And of course, the linear quality of their buildings was to have a profound effect on modern architecture, most notably with Frank Lloyd Wright’s work.

My very first job after graduating in 1981 was working at the Royal Academy’s blockbuster show called The Great Japan Exhibition, each gallery stacked with treasures. And so it was with thoughts of stunning woodcuts, gilded screens and delicate lacquerware (yes, and plastic) that I ventured to Japan for the first time last month.

There’s only one way to travel in Japan and that’s by train. Tokyo station was built in 1914 but feels more like an air terminal with the shinkansen trains gliding in every few minutes to scoop up passengers. They’re beautifully streamlined with long noses and an almost seamless junction between carriages. Reaching speeds of up to 320 kph, they hardly shake or roll while sitting inside. I couldn’t help feeling how different Australia would be if it had a train system like this to speed across its distances. And yet however hi-tech the trains are, the old traditions persist. After checking the tickets in a carriage, the inspector turns at the door and bows. (They bow an awful lot in Japan – I began to feel like the Queen.)

a slipper for every occasion

For such an overcrowded country there is a concentration on beauty at a micro-level – the elegant hand gesture as your room key or your change is presented to you; the beautiful packaging for everything from a single apple to a takeaway lunch; the astonishing lavatories where you can adjust the seat temperature, the water pressure and even the speed with which the lid is raised or lowered. And don’t get me started on the slippers. Thoughtful design fills every part of Japanese life (although thoughtful doesn’t equate to ecological – the country runs on packaging).

The Memorial Garden at Hirosaki was full of autumn colour so my partner was happy. I was more interested in the pavilion at its entrance. Traditionally built, wooden-framed, with each room floored with tatami mats, I was taken especially with its glazed-in verandah which ran around its perimeter. I thought of Mies van der Rohe’s Farnsworth House of 1951. I’ve always believed that Mies van der Rohe did Modernism as haute couture. His fine detailing now felt to me so Japanese. 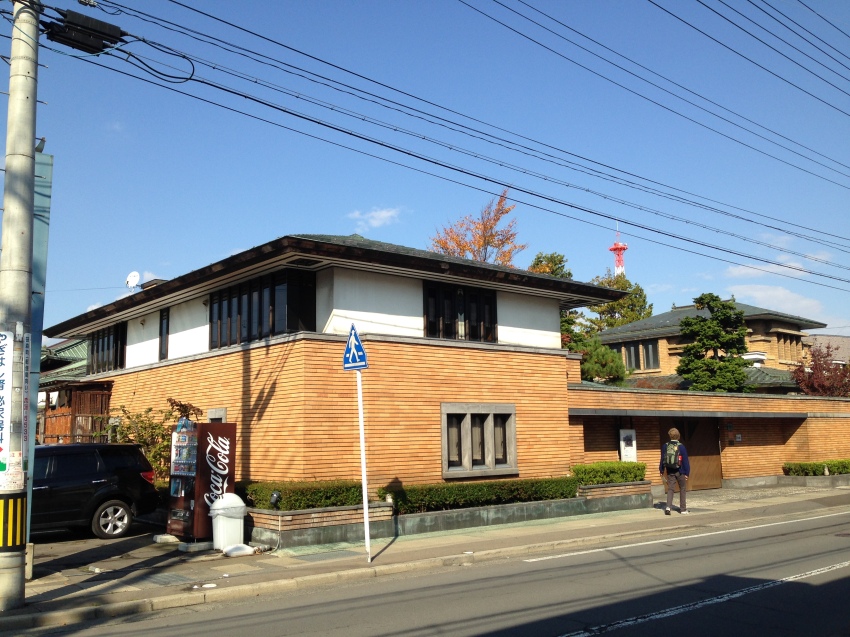 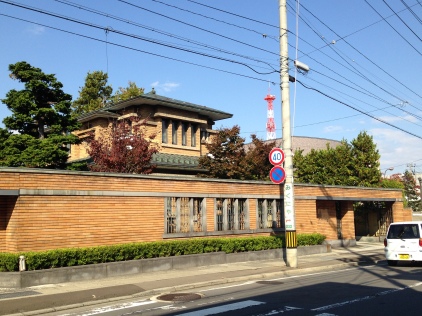 It’s just got to be… 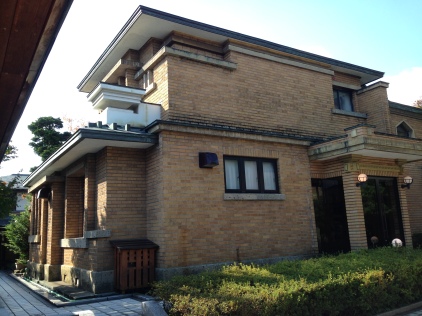 Frank Lloyd Wright built the Imperial Hotel in Tokyo that opened in 1923 and famously withstood the massive earthquake of the same year that levelled much of the city. In 1967 it was demolished although chunks of it survive in the building that replaced it. I was staying in Hirosaki, an ordinary city in the north of the island, and was surprised and excited to find a remarkable Lloyd Wright lookalike right next to the ryokan (traditional inn) we were staying in. Judge for yourself. Isn’t this pure FLW? No downpipes to wreck the horizontal lines even, just like his houses in Oak Park, Illinois. I tried to find out if it was the real thing but no one seemed to know anything. If you know better then please tell me.

I couldn’t go to Tokyo without visiting two important buildings. The Museum of Western Art was designed by Le Corbusier and opened in 1957. It’s quite a Brutalist lump although Corbu gave a nod to the Japanese aesthetic by facing the central core with pebbles, rather than leaving raw concrete like his monastery at La Tourette of the same period. It’s not a building that made my heart sing, not like Ronchamp or the Villa Savoye, but I was only able to comment on its exterior as the place was shut.

Luckily Kenzo Tange’s St Mary’s cathedral from 1964 was open. I had seen this structure in a book on contemporary churches that I used to have almost on permanent loan from the library when I was in my teens. I used to sketch it endlessly, entranced by its shining, swooping lines.

It was smaller than my teenage mind had imagined but its exterior gleamed in the sunlight, the skin stretched like a tent over its structure. Tange was a friend and admirer of Le Corbusier and this building certainly shows the influence of LC’s Philips pavilion from the Brussels Expo ’58. Inside, the concrete roof bears down but I found it disappointing after the lightness of LC’s magnificent concrete ceiling at Ronchamp. 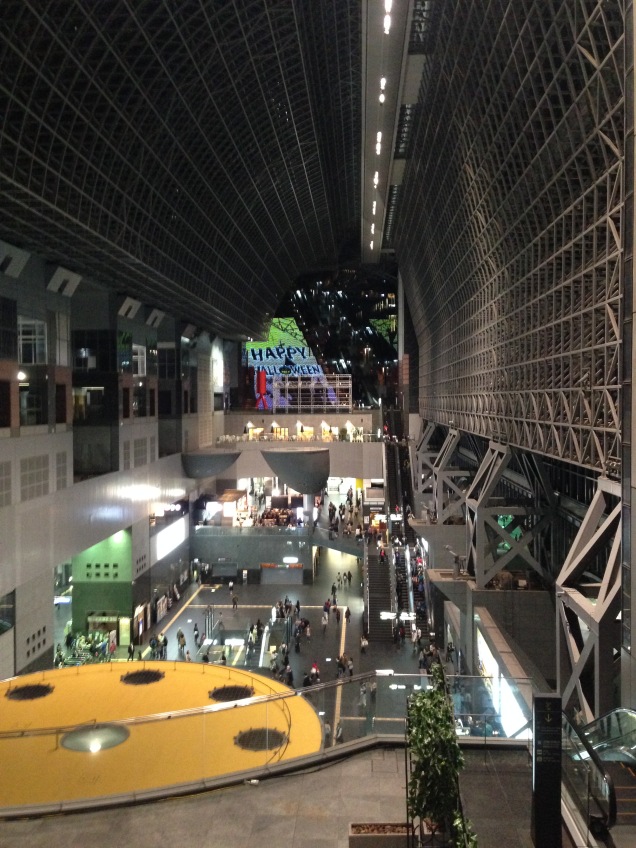 A wonderful ceiling was visible at the Tokyo International Forum designed by Rafael Viñoly in 1997. Capping an incredible space I felt as though I was looking up into the ribs of an airship or a whale. I thought of those famous lines from Lao Tsu’s Tao Te Ching: profit comes from what is there, usefulness from what is not there. That sense of space was present in the ultra-modern railway station at Kyoto by Hiroshi Hara, also opened in 1997, where oodles of square metres that might otherwise have been taken up by office or retail floors were given over to pure open space. It was a marvel to walk through, to feel overwhelmed but not intimidated by a building. Such spaces make you feel bigger, in fact – surely a sign of great architecture.

I left Japan with a very strong appreciation of the thoughtful interaction between humans and their surroundings, from Shinto shrines tucked into forests to elegant train interiors. Intentional design has a calming effect in crowded places.

All the same, I was quite glad when nobody bowed to me as I arrived back in Australia.