The masque of Italy

If you haven’t already visited Venice then I’m sure it’s on your bucket list. There is simply no place like it. I am lucky enough to have visited it several times. The most memorable was when I was in my second year at university and a few of us nipped over in the middle of term to meet up with the lucky few who got to spend an entire term there, studying the art and architecture of the region. The week we arrived turned out to be Carnevale, newly revived and therefore still something of a secret. It was dreamlike to walk the alleyways and come across people in full costume – masks, crinolines, the lot. At night there were little braziers on Piazza San Marco around which people sat and strummed guitars. The week finished with a huge party in the Piazza and a flock of white doves being released from the top of the campanile. I’ll never recapture the incredible mood of that February visit but Venice always delivers something memorable, no matter when you go.

Now I am lucky enough to write and broadcast my short pieces most weeks on ABC Radio National’s Blueprint for Living.  The individual pieces can be found in the Podcasts and Other Writing sections of this site. Occasionally several pieces are included in a longer feature but not printed on the webpage. This week it was about Venice – the ‘masque of Italy’ as Byron described it.  You can listen to the whole podcast but I thought I’d reprint my individual Venetian contributions here: 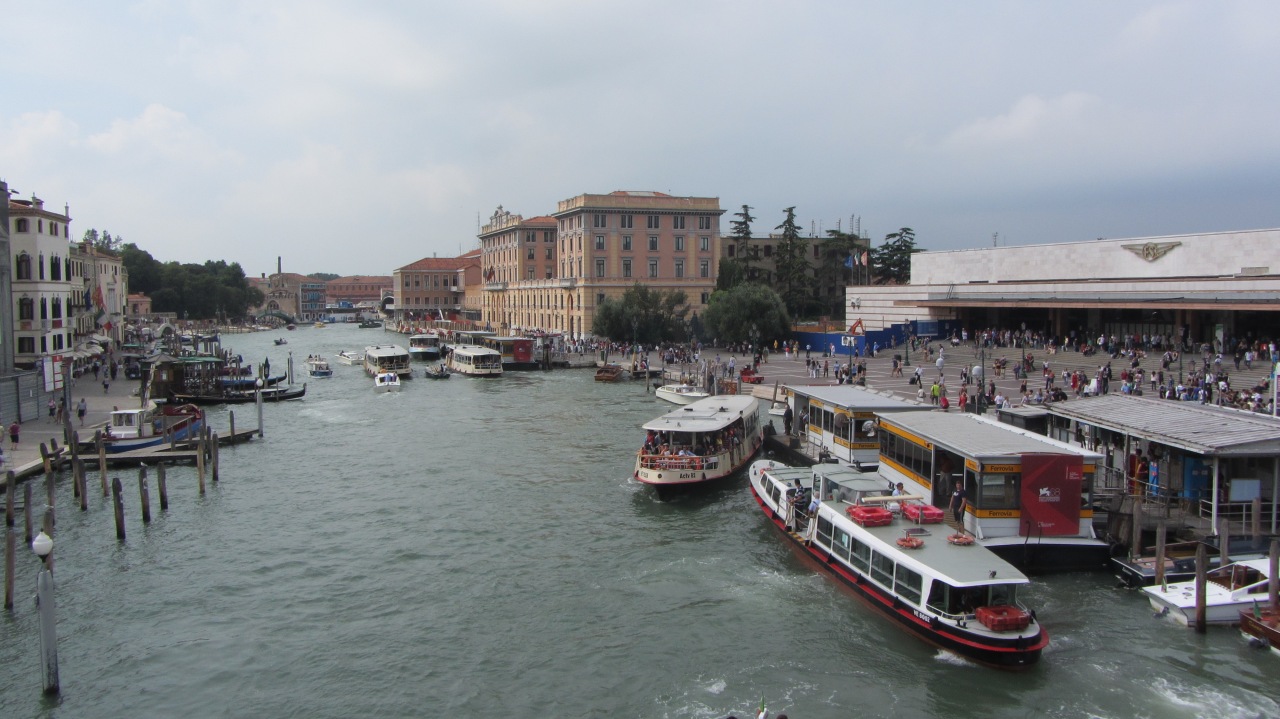 The best way to arrive in Venice is by boat, like Aschenbach in ‘Death in Venice’, but a close second is by rail. You don’t expect trains in Venice but its station is one of the most theatrical in the world. Your train takes you across the lagoon on a viaduct that was built in 1846 to serve the first Santa Lucia station, which was replaced by the current building. The great stations of Italy are often statement pieces – Milan’s is overblown and monumental, Florence’s is 1930s rationalism, and Rome’s is all 1950s glass modernism – so it’s a surprise to find that Venice’s is like many others around Italy – polished travertine pillars, tiled floors, and a ticket hall graced with a jaunty mosaic. But then you step outside. It’s as energising as discovering the Grand Canyon there because, beyond the shallow steps and the open piazza, is the Grand Canal itself. This is the business end, though, not the bit Canaletto painted, but all the same it’s filled with life – the vaporettos churning the water, the water taxis, and the crowds of tourists lugging their bags across the bridge and into the city proper. A domed church and the faded grandeur of medieval buildings face you on the opposite side of the canal. You expect singing at the very least but there’s usually the sound of bells.

Before you leave, turn around and take in the station building. It’s long and low so that it doesn’t intrude on the skyline. The winged emblem of the rail company crowns the plain façade, the only decoration. The building was planned in the 1930s by Virgilio Vallot, who was happy to do whatever Mussolini wanted. And Mussolini wanted modern stations – this one now handles over 30 million passengers a year. In fact the building wasn’t completed until 1952, slightly modified by Paul Perilli, but retaining the Fascists signature stripped classical look that is hard not to admire, despite the politics behind it. As a plain and simple gateway, it allows you a moment to gather yourself before succumbing to the theatricality and riches of the city before you.

Peggy Guggenheim was art. Her uncle, Solomon, had already amassed a great collection that would be housed in Frank Lloyd Wright’s gleaming white museum in Manhattan, when Peggy began immersing herself in the cultural scene of 1920s Paris. She even married two Surrealist painters in succession, one of whom being Max Ernst. And she took abstract art to the world, starting with her gallery in London. She famously bought an artwork a day for her own collection, including everyone from Brancusi to Picasso. She made sure everyone knew who Kandinsky was and then, back in America during WW2, she gave Jackson Pollock his first show, supporting him throughout his career.

In 1947 she bought the Palazzo Venier dei Leoni in Venice, in which she lived until her death in 1979. It’s one of the most unusual buildings in the city. Facing the busiest stretch of the Grand Canal, not far from the Salute church, you might mistake it for a modernist interpretation of a Venetian palace, being so white, so low, so odd. But look at the monumental Palazzo Cornaro on the opposite side of the Grand Canal and you’ll see the sort of place it was intended to be. Only grander. The Veniers were one of the city’s most venerated families, producing three doges, including one painted by Titian. Work started on the palace in 1751 but almost immediately stopped, no one quite knows why. The ground floor languished in its wonderful setting until recovered by the Marchesa Luisa Caserta in 1910 who reinstated its grand rooms, hosted somewhat ludicrous parties for the likes of the Ballets Russes and had a flock of albino blackbirds whose feathers she dyed according to her mood. Another socialite owned it afterwards before Peggy Guggenheim got her hands on it in 1947. In 1951, she flung open its doors to the public, allowing everyone to enjoy her remarkable collection of works by the greatest C20th artists which positively drip from its walls. Peggy herself is interred in its beautiful garden, overlooked by statues by Marini and Kapoor. It’s an enchanting spot to sit and reflect but  better yet is to steal away from the crowds and stand on the waterside steps, gazing out at the Grand Canal. Here you can appreciate how this was always meant to be the doorstep to a magical world, almost as surreal as some of the works it now displays.

Social housing on the Giudecca 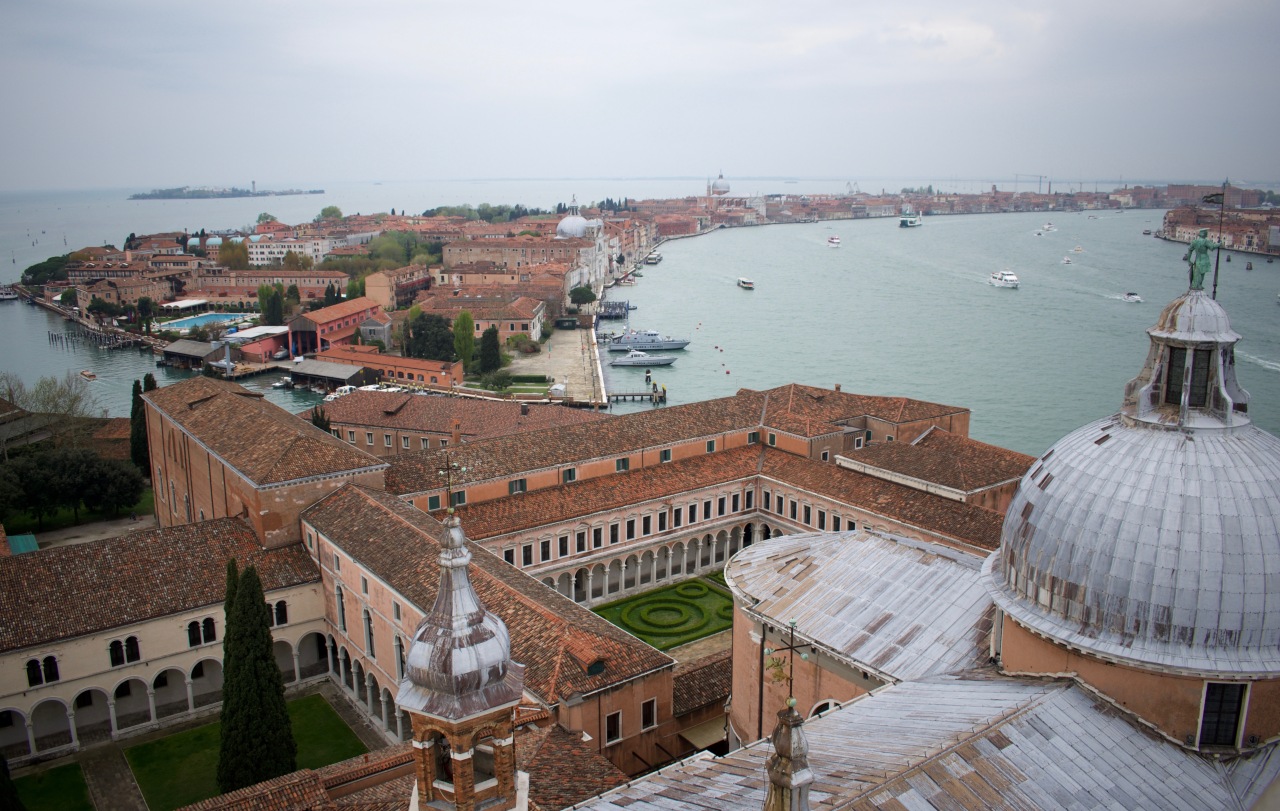 Giudecca from San Giorgio Maggiore – the grey roofs of the Aldo Rossi development are glimpsed to the left of the Zitelle church dome, the Valle development is beyond the red-brick mill right at the other end
Thanks to Flickr James West.

The Giudecca is the island tucked to the side of Venice and people visit its great buildings like Palladio’s Redentore church and various C19th villas, or they luxuriate in grand hotels like the Cipriani. But the island has long been a place of workshops, boatyards and warehouses. Many of these buildings remain, often re-purposed as cultural spaces. There was always a population living here, the workers for the area. Which is why it’s worth tearing yourself away from the main sights and taking a moment to walk along the quiet and often surprisingly leafy laneways of the Giudecca. It’s here, for instance, in the Campo di Marta that you’ll find social housing by Aldo Rossi, the architect and theorist who won the Pritzker in 1990. Rossi’s seminal work, ‘The Architecture of the City’, stressed the importance of cultural context, the way that our buildings reflect how we think of ourselves. His own buildings have a curious familiarity, all light and shade like a de Chirico painting, with elements that evoke other eras. Tucked away next to the island’s market garden, this cluster of pale-terracotta, low-rise apartment buildings, built in 1984, is topped by arched metal roofs that recall the dome of the nearby Redentore church as well as buildings by the early modernist architect Adolf Loos. The solidity is broken up by brick staircase towers that evoke Renaissance fortifications.

And while you’re here, take a stroll to the western part of the island to inspect a larger complex, designed in 1980 by Gino Valle, with 94 apartments tucked into an area bounded by narrow canals and abandoned factories. These finely-shaped brick buildings evoke industrial warehouses, and the ostentatious neo-Gothic flour mill nearby, now an equally glitzy hotel. Seemingly crammed together, the long apartment blocks contain covered arcades, crisp staircases and stolen glimpses that draw you onwards and reference the narrow alleyways of the old city itself. The tall canal frontages have stylised gables sliced in two, like ruined classical pediments.

These social housing projects may not be the equal of the grand palazzi and churches nearby but they show how good design and liveability remain an important part of this, the most extraordinary city on earth. 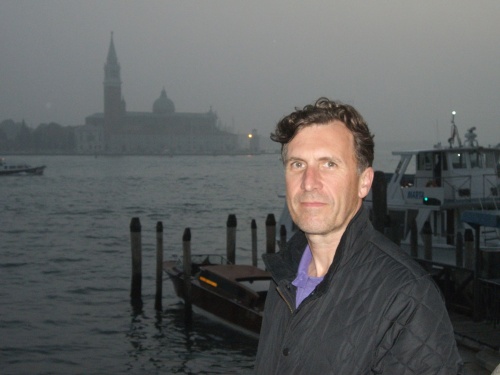 Do you have a favourite building in Venice?