My recent trip to Europe was all about nature and walking. Which was completely different to last year’s trip, which was pretty much all about Le Corbusier. It’s not that I didn’t want to see any more of his work, I just thought we needed Alpine meadows and clifftop walks to clear the energy of a busy year. Seeing architecture was a low priority, or so I thought.

the calanques on Corsica’s west coast

We got nature a-plenty. We started by exploring the beautiful calanques region of Corsica, where pigs roam free, and the sunset makes the rocks glow red. It’s a region where the flavours and scents hit you over the head, and where plates come loaded with strong sheep’s cheese and melting Corsican ham, washed down with chestnut beer. Sated, we shifted to mainland France to stay with our friends John & Janie in their wonderful house (www.lepuget.co.uk if you fancy doing the same). 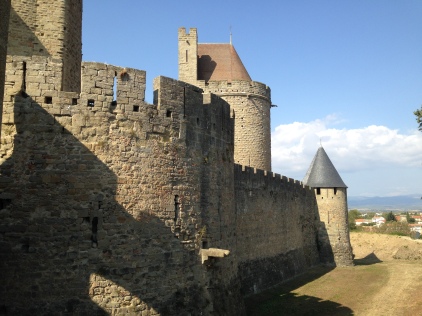 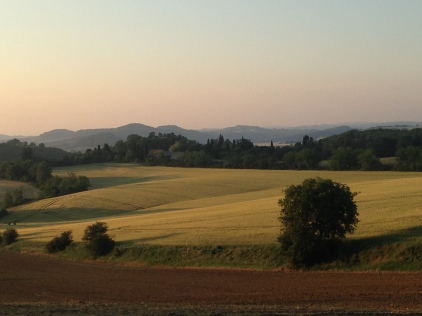 Of course we nipped into nearby Carcassonne and you can’t help smirking at the audacity of Viollet-le-Duc’s restoration of the citadel. Crammed with tourist shops and restaurants today, it feels every bit as Disney as it looks, and frankly I prefer wandering through the streets of the main town below. The restoration, carried out in the 1850s, has long been ridiculed, as Viollet-le-Duc added the sort of pointy roofs that no self-respecting town in south-west France would be seen dead wearing. And yet recent opinion is changing and some experts now say that it’s much more accurate than first thought.

Le Puget’s closest town is Mirepoix, an extraordinary bastide town with a deeply-arcaded square that is more or less exactly as it was in the 13th century. I particularly enjoy the lovely doorways in the laneways, so archetypically French. You hear a few English voices, too. On market day I overheard one rather perplexed man say to his wife: “I’ve walked the length of this market and I’ve yet to come across a single apricot.” It was late September. A sign of how some people have no idea of seasons now that everything is available year-round in the supermarket. 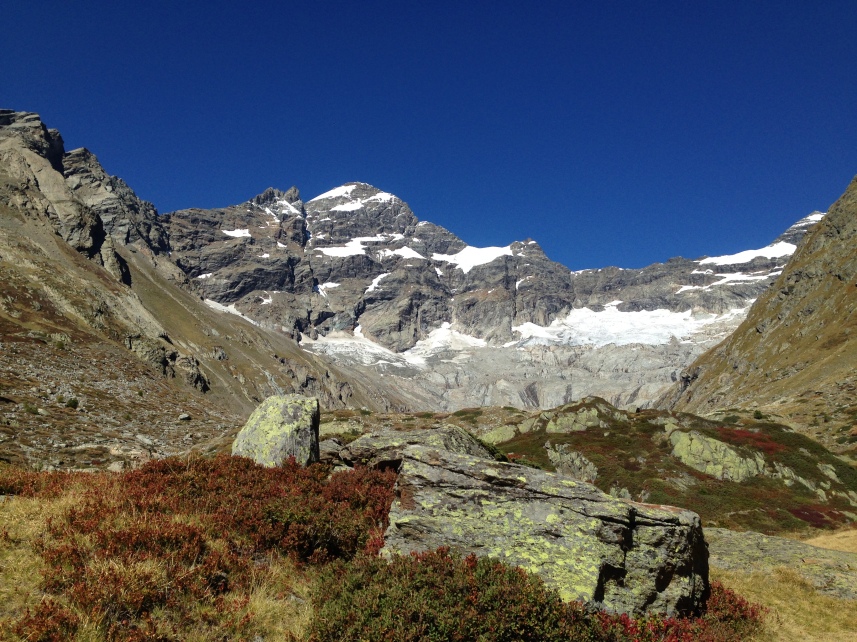 along the Aletsch glacier

Chandolin, in the Val d’Anniviers

Suitably relaxed and rather full of fabulous food and wine, we headed off to Switzerland. Nature and walking, pure and simple: the hidden Lotschental valley; the precipitous path alongside the stunning Aletsch glacier; the sublime Val d’Anniviers where you keep gazing up at the Matterhorn and saying, “Oh look, there’s the Matterhorn.” I was doing so well, really, without my architecture fix. There were fascinating chalets to look at and spooky old churches and even a peek at Mario Botta’s addition to the chateau at Leuk. But really, no architecture to get my heart racing.

Until we were driving to Geneva airport on the final day. We were on the southern shore of Lac Léman and had stopped for lunch in a park across from Montreux. I lifted my binoculars to scan the opposite shoreline, and there it was, tiny and bright in the sunlight: the little house that Le Corbusier built for his parents in 1924. The temple by the lake, as he called it. A simple house in which his mother lived (and grumbled) until her death in 1960. It wasn’t open to the public that day so I’d agreed that we wouldn’t drive the longer route just to pass its closed doors, especially as we were driving a car that had the power of a surgical boot. But something stirred in me, like a caffeine addict who’s caught a whiff of roasting coffee beans. Suddenly I needed architecture. Good architecture. Le Corbusier architecture.

the back of Evian’s original buvette 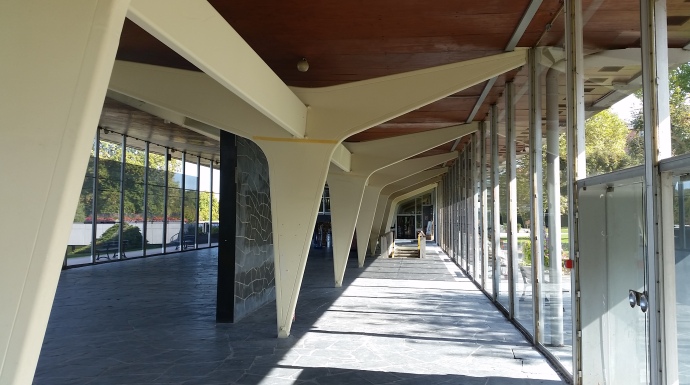 look at that structure 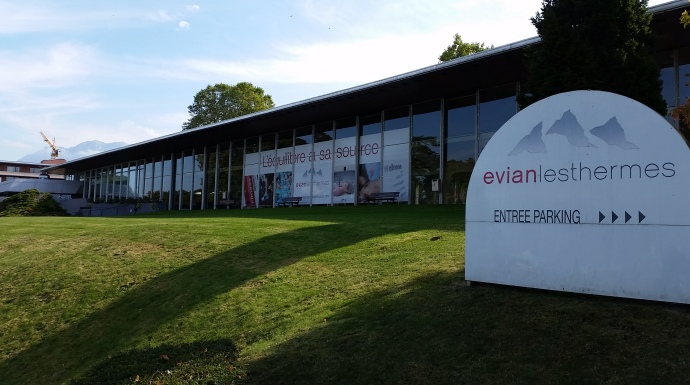 We stopped at Evian-les-Bains, the sedate spa town with its assortment of Belle Epoque buildings. The original spa building is splendidly wacky, with lots of Art Nouveau details. But, alerted by a Facebook buddy, I knew that there was something better a short stroll away. The modern spa building has an annexe, which was built in 1956, and engineered by Jean Prouvé. He worked with Le Corbusier on numerous occasions, coming up with the metal fittings for the Unité d’habitation building in Marseille. He was an expert in aluminium mouldings and prefabrication and designed everything from aircraft boarding staircases to prefabricated buildings intended for tropical Africa. This snackbar (or buvette) in Evian shows why he is so great. That elegantly poised frame, as streamlined as an aircraft wing, means the walls can be filled with glass. It all looks so effortlessly light and graceful. That day the place appeared almost abandoned, and there was plenty of rot on display despite its being a National Monument. 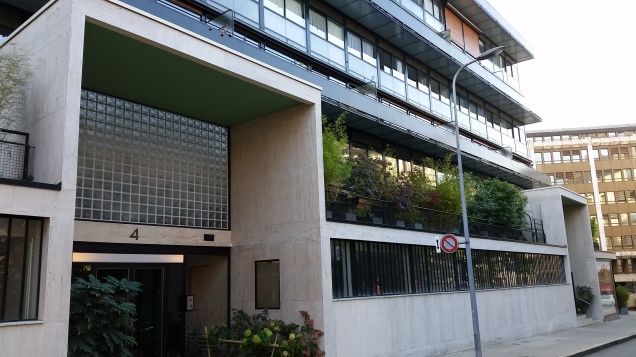 I had the smell of good architecture in my nostrils and I needed more. We arrived in Geneva with just enough time to find the apartment building that Le Corbusier designed in 1931. It took a few wrong-turns, and at first I wasn’t sure that it was the Immeuble Clarté: it looked as though it had been built last year. Until I looked around the back and saw its row of little garages. Le Corbusier adored cars and it was typical of him to make a feature of the garages, demonstrating just how modern he was. The building is a wonder, reminiscent of the Molitor building in Paris that he completed in 1934 and where he and Yvonne lived. This, though, seemed even lighter, with the double-height living areas that would become such a signature of his Cite Radieuse designs (and which, of course, he showed first in the Esprit Nouveau pavilion at the 1925 Paris expo). It was glorious to see it. Yet again, I found myself nourished by seeing buildings that shaped the architectural world.

As my plane lifted off from Geneva airport, I gazed out at the bulk of Mont Blanc and the lake glimmering in the evening light. Lovely, I thought. But you know, next time I need my nature to be tempered with a little more architecture. Call it an addiction.

the surgical boot aka Renault Twingo