On a superficial level

This week’s Design File is all about colour (see Pantone). As those who heard my essay on colour for By Design a few years back will know, I have a kind of love-hate relationship with colour. This is perhaps odd considering I worked for many years for one of Britain’s most colourful fabric companies, Designers Guild (and odder still that I was the interior designer there for several years).

I love colour when it’s used in a beautiful way (think of India) but wearing colour scares me at times. I struggle to understand why certain tones just don’t suit. Maybe I’m colour blind? Thank God for dark blue.

But it’s not colour that is bothering me so much at the moment. My issue is texture. I’m considering adding another floor to my little house, which already has a painted texture that might at a pinch be called Tyrolean. Sloppy render could be another term. 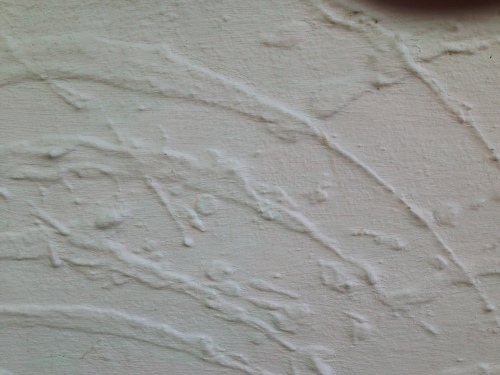 While I rather like it in its 1950s way, I don’t particularly want to continue this theme to another floor. The basic options are render, wood or metal and I suppose I could throw stone and brick into that mix. And so I’ve been prowling around the neighbourhood looking at other people’s renovations, feeling none the wiser but getting odd looks as I peer up to the bedroom floors.

I can’t stop looking at textures, and whatever I end up doing with the renovation, my eyes have been opened to the variations all about us.

I was born into a house that had a harled exterior – the word ‘harl’ is used in Scotland to describe a sort of pebble-dash render that is then painted, although it is often left grey and rather dismal. The French use the word crépi for something similar and throughout France there’s been a trend to remove it and expose the stonework behind, which is literally changing the face of the country.

After the harled house we moved to a brick house which I couldn’t warm to although I like Dutch brickwork, which is when the bricks are very slim and give a streamlined effect. One set of grandparents lived in a house constructed of cedar, which was popular on the west coast of Scotland and gave the house a warm, friendly atmosphere and a muffled accoustic, while the other set lived in a very dour stone house, which was the norm on the east coast, that was always cold and echoey, fitting for the harr that rolled in off the sea.

At university in Norwich, the main campus was built from concrete (by Denys Lasdun), much of it shuttered (poured within planked moulds) which leaves the impression of the wood on the concrete. My faculty, however, was in the Sainsbury Centre which was all shiny aluminium and glass. Both looked brilliant contrasted with the texture of the grass that swept all around them. I think this contrast is important. Too much of one thing is over-powering, like a street that has no trees. 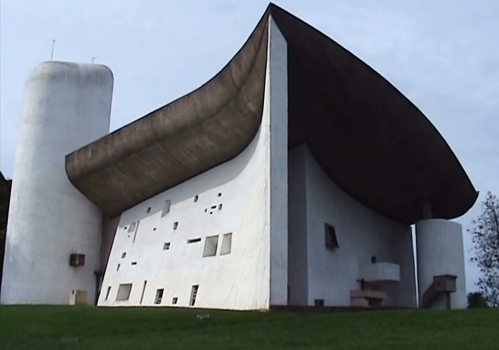 Le Corbusier was pretty good at textures, as a trip to his chapel at Ronchamp will demonstrate. The rendered walls, deep window recesses, shuttered concrete roof and enameled entrance door are done with such a flourish, creating shadows that further embellish this extraordinary structure. 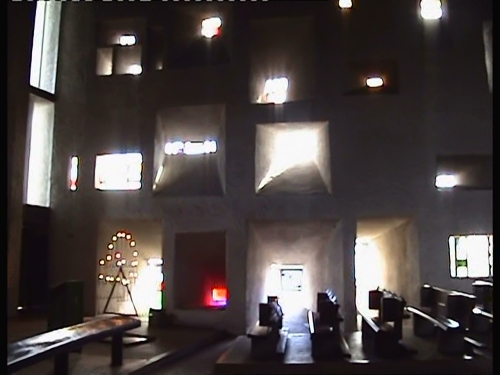 The colourful enamelled door at Ronchamp

It creates an intensely moving building that is rightly hailed as one of the most important of the twentieth century. (And down the road in Audincourt’s simple church, you can see the gorgeously coloured stained glass windows of Le Corbusier’s great friend Fernand Leger.) 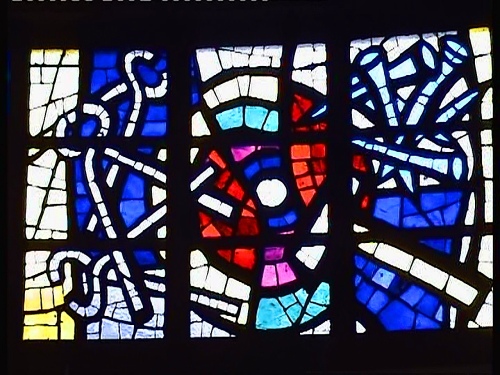 A Leger window at Audincourt

I’m still looking around me. What texture I end up with is still a mystery to me but I’m loving looking.