The ambivalence of the ex-pat

The 26th January is Australia Day. The first time I was ever aware of this was one wet wintry morning in London years ago as I crossed the piazza at Covent Garden. A stage had been set up with a colourful banner above it proclaiming Happy Australia Day! No one was on the stage – everyone was sheltering under the portico of St Paul’s church. All the same, as I had just fallen head over heels in love with an Australian, I took a vague kind of interest before hurrying on to wherever I was going.

not all the buildings are bad…

Australia Day is sometimes called Invasion Day as it marks the day in 1788 when the First Fleet dropped anchor in a deep harbour on the east coast and claimed the land for Britain. (No one else lived here, according to them – terra nullius – and much was done to make that come true, with Western illnesses and massacres finishing off many of the Aboriginal tribes). They called the colony New South Wales and eventually Australia became a fully-fledged country in 1901 with the Federation of its various states and territories.

As a schoolboy, Australia was the place you learned about in geography lessons, a place of sheep and minerals. Its soap operas were the stuff of daytime television – The Young Doctors, A Country Practice, Sons and Daughters – until Neighbours burst onto the scene. Everyone seemed to live in a house with dim interiors and velour sofas but the sun was shining outside and that brightened everything. It was a huge success in Thatcher’s Britain, somehow innocent and upbeat. It was closely followed by Home & Away, set in an imaginary coastal town (but actually filmed on the northern beaches of Sydney). Like Neighbours, the sets were rather wonky and the storylines were resolved in a matter of episodes and both shows were lightweight compared to the British soaps but that sunny, low-fat quality was appealing in its way. Suddenly everyone knew about Australia (and a generation of British Kylie’s was born).

I never imagined I would end up living in Australia but meeting my Australian partner soon changed that. I didn’t even visit Australia before moving here, which shows my level of commitment to change. My first impression of Sydney in 1996 was of sunshine, flimsy houses and telegraph wires along every road. It seemed rather bland and old-fashioned – the buildings were unattractive, the supermarkets lacked choice, and the roads had cars on them that I hadn’t seen since I was a child. The bird noise was incredible. Gradually I became used to it, and the country changed, too – more adventurous, broader choice, more in step with the rest of the world. Maybe it lost some of its innocence, too.

It’s a strange thing being a foreigner in another country – you never quite belong. Now I feel like a stranger when I’m in Britain, too, and I realise that I have become used to living in Australia. It’s not the greatest country but no country is. There are things I love about being here and things I don’t, which was exactly the case when I lived in London (although not about the same things).

So today’s the day to state the things I love about Australia: 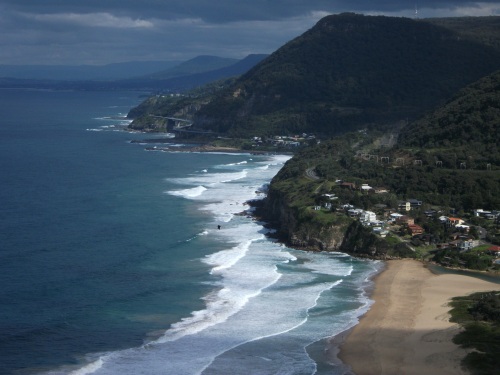 But being British (a ‘whinging Pom’ as we’re called), I have to balance that with the things I dislike:

I may miss Melton Mowbray pies, lovely old buildings and the British sense of humour but I’m grateful that I moved. I love difference. Living on the other side of the world has shown me that the world is a tiny place and that home is a flexible notion.

And I’ll never get over having parrots in the porch.