Propagating in a pandemic

There have been many beams of light through the gloom of this pandemic. Chief among them is the dazzling resourcefulness of so many, from the way people have adapted to working from home (including working out how to cope with Zoom meetings) to the incredible efforts of a few to support those who have found themselves suddenly on the brink of poverty. Locked down, some have taken up new hobbies, especially baking, with sourdough bread-making topping the list (although there are plenty of videos that show that everything on the planet is, in fact, made of cake.) Others have taken to growing their own food. In fact, this pandemic has created a real them-and-us world: those who have a garden and those who don’t. I’m fortunate to be in the former camp and even luckier to have a partner who loves nothing more than propagating plants. We never travel anywhere in the world without visiting at least one major garden.

I’ve hardly lived anywhere that didn’t have a garden. As children my sister and I were given a patch at the back of the garden where we could grow what we wanted – I think nasturtiums and sweet peas were our main crops. One set of grandparents had a rather amazing garden that they worked on constantly, filling a sloping plot with terraces brimful with specialist plants, the whole thing overlooking the beautiful Kyles of Bute. The other grandparents, across in Fife, had a large and cheerless garden that had virtually nothing in it but grass. A small greenhouse stood in the centre with two deckchairs saved from an old ocean liner and which provided a warm space for my grandfather to read his newspaper, far warmer than the austere stone house that was freezing even in summer. 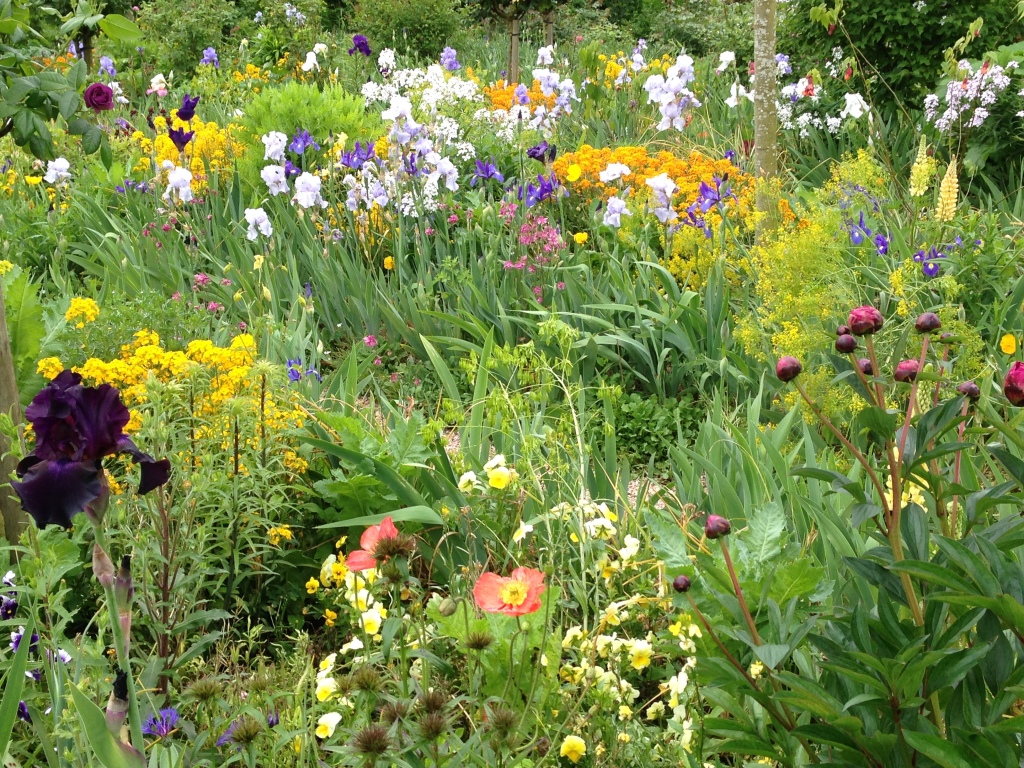 There’s something of that contrast in Australia, which is implied in the common use of the term backyard instead of garden. When I say ‘garden’ here, it sounds rather pretentious, like we might have cascading fountains and prancing unicorn gateposts. A backyard, on the other hand, is somewhere to kick a ball, dry your clothes and keep nature at bay. Our backyard was just that, when we moved here, but gradually we replaced all the grass with plants, some more successful than others, and it has become a garden. It’s not a great block, sloping southwards behind the house (away from the sun in the southern hemisphere) which means it’s shaded in winter and bakes in the summer. But the front garden is always sunny and it’s there that we have, at the moment, what might be called our pandemic garden.

Years ago every household was given a sturdy plastic trough so that paper could be collected and recycled. These were replaced by large bins for all recyclables, from paper to glass, and the troughs were discarded. Or collected by people like my partner for the garden. With new drainage holes and filled with good soil, these are now brimful with lettuce and rocket, Swiss chard and Asian greens. There are some flowers, too, and at any time of the day there seems to be an incredible variety of insect life, including a few foes, like the cabbage butterfly. The beauty of these troughs is that they can be moved, taken away in the summer when the front garden becomes more suited to succulents than thirsty plants.

a row of productive plastic troughs

It’s amazing how productive a single trough can be. Even better, they’re perfectly suited for anyone who doesn’t have a garden but might have a sunny balcony. This was something that journalist Indira Naidoo promoted in her book ‘The Edible Balcony’. But when I look up at blocks of flats, it’s rare to see something growing. It’s true that they are often hostile spaces, whipped by desiccating winds and roasted by western sun, but many are perfectly useable. It seems such a waste, to me, not to grow at least some herbs. Even in my little flat in London I managed a pot of rosemary, my favourite herb along with basil.

daikon ready to be harvested

For the moment, we’re enjoying daily salads using leaves from the garden and a new favourite, the daikon radish, which is so refreshing when grated in salads while its abundant leaves are a tangy side dish when sautéed in butter. Other parts of the garden have been planted with different vegetables that need more room, like beans and potatoes. Most have survived the on-going battle that is the fate of every Australian garden, where anything tender and green is often scoffed during the night by possums (RIP broad beans). At the moment, Anthony is trialling the use of heavily scented plants around the vegetables to keep the critters away – lavender, resinous geraniums, curry bush and garlic. He has even hung little nets of dog hair from a friend’s whiffy Labrador on the bean trellis. So far so good.

At night, as I hear the soft chirruping calls of the ringtail possums outside the window, I wonder what will have survived by morning. Later, as the sun rises and swings around, and the front garden is bathed in its brightness, I inspect the nibbled edges of leaves attacked by caterpillars and the bare space where strawberries were ripening before a bird took a fancy to them, and yet I’m still heartened by so much. By the fact, for instance, that there are so many bees, the saviours of this planet, and by the beauty of the dragonflies and hover wasps and bright green grasshoppers. Because really, at times like these, it’s not only our resourcefulness that I’m marvelling at but the fact that the world, the natural world, is just getting on with its daily tasks, that life goes on. At times of stress there is nothing lovelier than a healthy plant, shining its beam of hope into the world around it. As Einstein said, ‘Look deep into nature and then you will understand everything better.’ That nature can be contained so perfectly within a plastic trough is truly a marvel to embrace.

Do you have a pandemic garden?