The joy of travel is all about new experiences and appreciating how others in our tiny world live. I’ve just returned from my first trip to China and I think it’ll take a while to digest everything I have seen.

The Chinese culture is familiar to me not only as a feng shui consultant but also from the simple fact of living in Sydney which has a large Chinese population. I was interested to see how China’s economic boom, which has kept Australia afloat during the GFC, was visible but I wanted also to see how feng shui was used in day-to-day living. 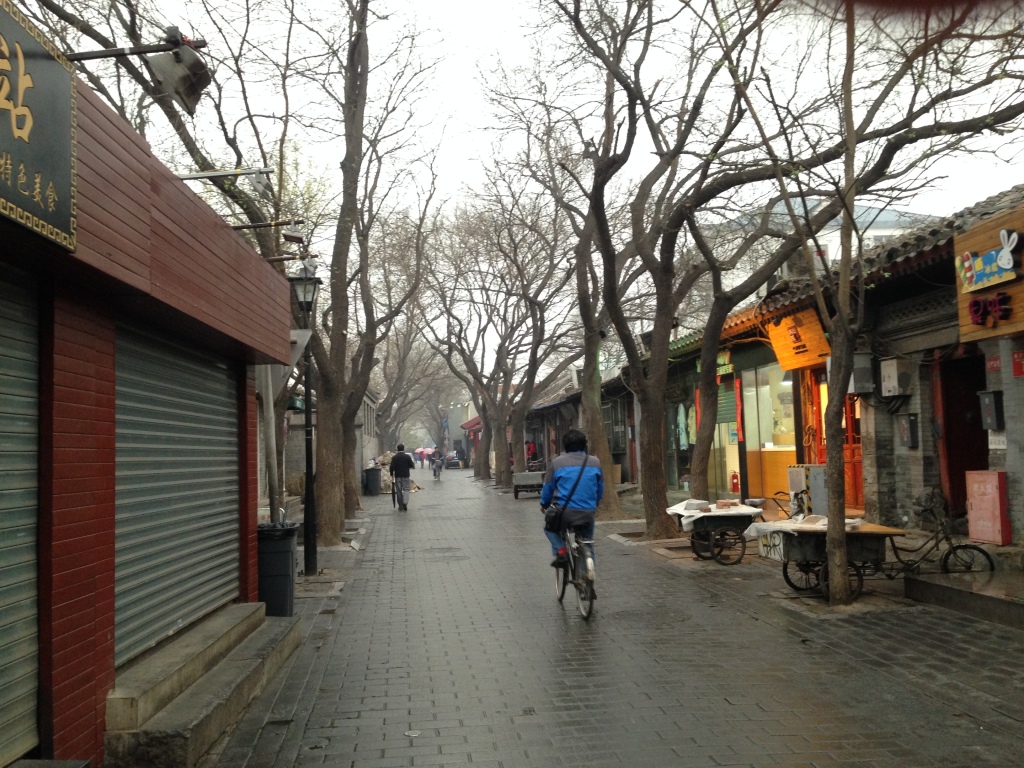 Landing in Beijing, which had just experienced one of its many dust storms, meant that visibility was very poor but even as the dust cleared, the haze remained. China’s polluted skies became famous, of course, when many factories were shut down during the Beijing Olympics in 2008 so that air quality would be improved. It demonstrated that clean-air technology would make a huge difference quickly. When I moved south to Xi’an and Zhengzhou, the air quality didn’t get any better and I found myself with a sore throat and persistent cough. It was clear (no pun intended) that the country has a big job ahead of it to bring down pollution levels. Only in Shanghai did I see the sun again, where the air is moved by the sea breezes. City roads were clogged with traffic and all cars that I saw ran on petrol. Unlike nearby Japan and its microcars, the large car with its large engine seemed to rule China’s city streets. So that all sounds pretty grim. 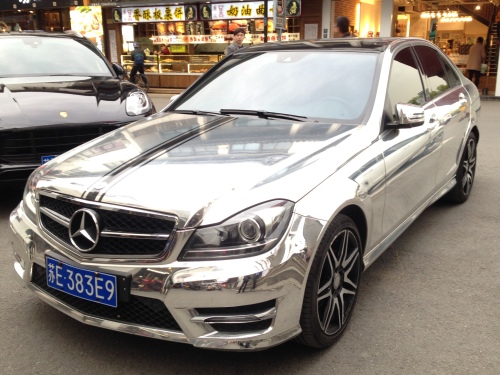 And yet there is an obvious push to change things. Most motor scooters were electric, and while the power stations that produce the electricity probably use (Australian) coal, the effect must make a difference. I imagine that widespread use of electric cars will soon follow, and perhaps they’ll see the sense of microcars, just as large cars have fallen out of favour in Australia. Solar water heating was visible everywhere, especially in rural areas seen from the trains, and the train system itself is so good that air travel isn’t as essential as it is in Australia. (Being able to travel at 300kph in comfort would change the face of Australia, as would efficient public transport systems in our cities.)

Where the growth of the country is most obvious is in the relentless building programmes. Huge new cities are built on the outskirts of existing ones, and whole areas are being constantly cleared to make way for rather grim-looking rows of tower blocks. I often thought how excited Le Corbusier would be to see this but how depressed he might be to note the poor building quality. Even in high-spec buildings, the quality of workmanship looked shoddy. 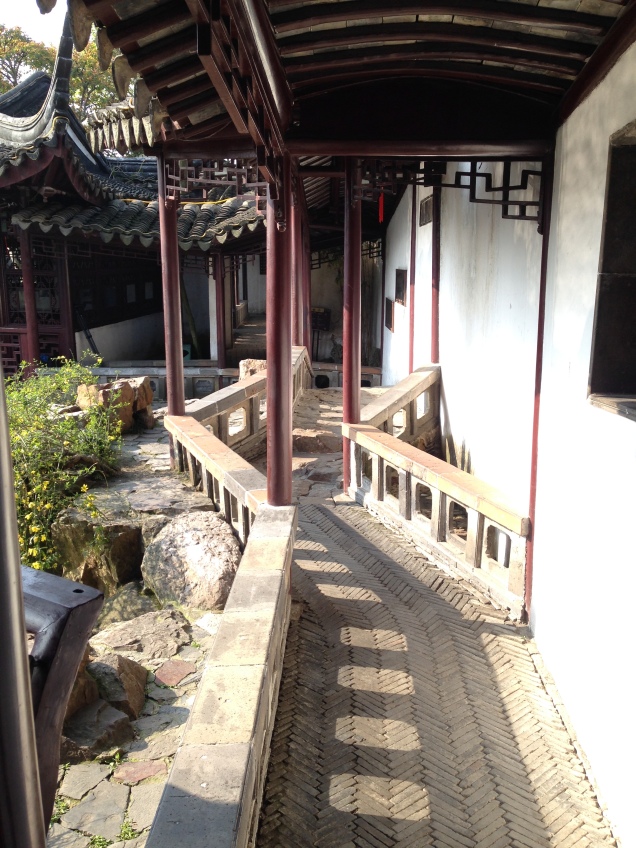 Master of the Nets garden 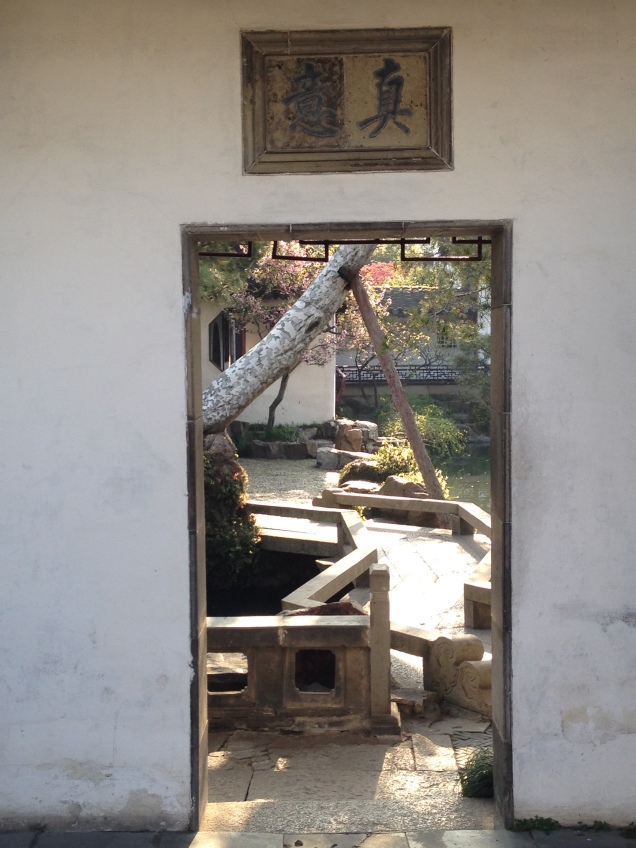 Master of the Nets garden

As for feng shui – the traditional practice of encouraging beneficial ‘energy’ (qi) into the home or business – this was most obvious to me in the classical gardens of Suzhou, where zigzagging bridges over gentle canals and curving pathways slow down your progress and create a calm and nourishing atmosphere, even in the packed Humble Adminstrator’s Garden. It’s rare to walk straight into a restaurant without having to change direction thanks to a screen or off-centre doorway, which again slows down the energy entering the place, thereby creating a more restful atmosphere. I loved seeing this, especially coming from Sydney where open-plan living is the norm and external views are given such importance that interiors often feel difficult to settle in – the containment is lacking.

Garden of the Humble Administrator 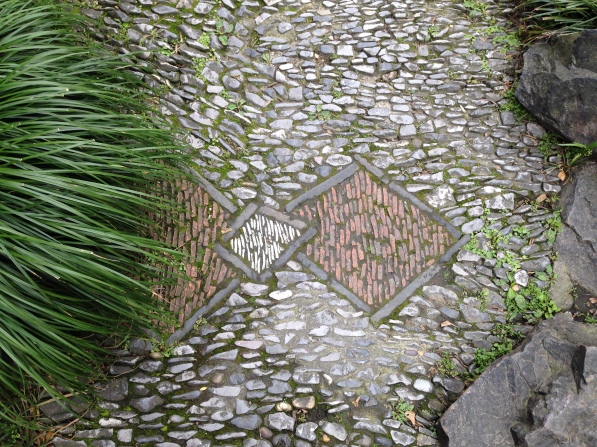 Everywhere in China I was aware of the balance of yin and yang, where textures and shapes and colours are placed together in opposition. Feathery plants tumbled over hard flat surfaces or small pebbles were placed next to large rocks. This constant contrast feels good from a design perspective and really does give a sense of balance, or harmony as the Chinese like to call it. Older people practiced tai chi or danced in the parks to maintain the flow of energy through their bodies. When you see men and women in their 70s and 80s squatting low on their haunches as they relax or work at something, it’s hard not to reflect on the West’s problem with obesity and creaking joints, and how we take our bodies for granted until they give up on us.

It was pleasant to be back to the clear blue skies of Sydney and my own leafy street. But I felt excited by China and its possibilities. It may give an insight into the future with evermore crowded cities but I couldn’t help thinking that positive change was in the air. Even China’s polluted skies will clear, I’m sure of it. After all, that’s one of the things about  yin and yang – balance is always restored. 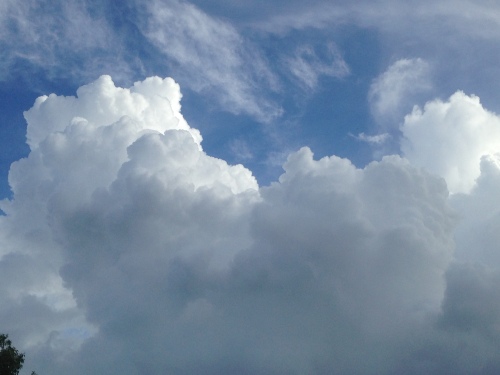