Over the past year or so when choosing a design object to write about for my Design Files, I am struck by the fact that so many of them originate in either Italy or France. I try to be fair, to find the items from across the world that have changed the design landscape, and still I come back most often to these two countries. For those who know me, that’s perhaps hardly a surprise as these are the countries that really grab my heart. For me, the landscape, the food, the architecture and the people are equally enthralling. If I really had to choose between them, I think it’s Italy that stirs me the most. While I think France would be an easier place in which to live, Italy would surely be that bit more fun.

And the Vespa is a symbol of that. In France, the motorised bicycles that used to buzz along every street seem to have disappeared. In Italy, the Vespas are still everywhere.

A couple of years ago I spent some time in Sicily. It was an odd start because we arrived by fast ferry from Malta, itself a fascinating place with its Baroque churches and stone palaces and incredible 1950s shop signs everywhere; odd, because arriving from the south made Sicily feel more European, whereas people have often commented how isolated it feels, stuck out off the toe of Italy. Immediately I loved it – the citrus groves lining the roads, the dusty squares that made me think I was in Cinema Paradiso, the semi-dilapidation of Noto, the charm of Ortigia and Taormina. The noise of people shouting to each other across the street or up to shuttered balconies. 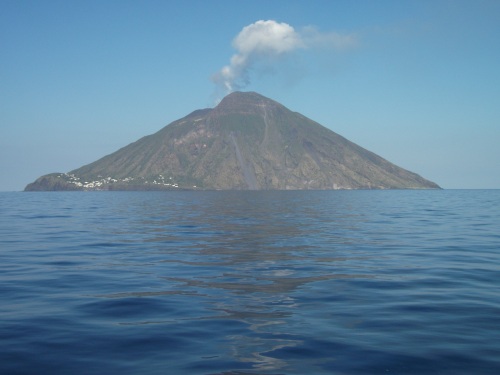 And then there was Stromboli. A two hour ferry-trip from Milazzo, it rises up from the sea, a perfect cone, topped off by a constant stream of smoke – the very archetype of a volcano. At nightfall, the eruptions every few minutes threw a bright orange glow into the sky, followed by the muffled sound of rocks falling around the crater. And the twinkling lights of the other Aeolian islands on the horizon – Panarea, Lipari and Vulcano the nearest – added to the ethereal quality.

Stromboli itself is a grim sort of place with its black sand and rather tired buildings. Who, I kept thinking, would choose to live on an active volcano? But that’s Italy. The old Asterix joke that says that the Roman SPQR stands for ‘sono pazzi questi Romani’ (they’re mad, these Romans) is something that comes to me often when I am in Italy. Pazzo, I catch myself thinking as I sidestep a couple arguing passionately about grapes in the market. And it is utterly charming, that slightly crazy feel. On Stromboli, everyone seemed to drive an Ape, those 3-wheeled pick-ups based on the Vespa. And how mad are they?

The other day I met a friend for lunch in one of the Italian cafes in Haberfield, a garden suburb of Sydney that has long been settled by Italians. Sitting at my table, with people queuing at the long glass counter for its array of ricotta tarts and freshly-made crostoli, I could have easily been in Italy. The life, the noise of it all. And I thought: what other country in the world makes you smile just by thinking about it? (I realise that may sound patronising but my feeling for Italy is one of awe, not superiority…)

Surely that sense of energy, of noise, of constant communication is the reason the country has hosted such an array of great creative inventions? And isn’t it why we smile when we see a Vespa (or a Fiat 500, come to that) bowling along the street, and how Alessi have understood that we like humour in the kitchen. These objects are imbued with a huge sense of character that speaks for an entire nation.

Now really, is that pazzo?