In the shadow of Le Corbusier

It’s easy to forget that most architects head a team. In the case of Le Corbusier, much of his work was completed in partnership with his cousin, Pierre Jeanneret, and yet Pierre’s name is often omitted in books. And that, I feel, says something about the nature of this rather unassuming man.

When researching my novel Loving Le Corbusier, I liked Pierre from the start. Photographs show him to be a rather small man with a prominent brow, an old-fashioned type in the Fred Astaire mould. His letters showed that he had a strong empathy with Le Corbusier’s wife, Yvonne, understanding that life with Le Corbusier wasn’t always straightforward, and yet it was easy to imagine the three of them meeting up most evenings for a drink after work, either in the Deux Magots or the Café de Flore. 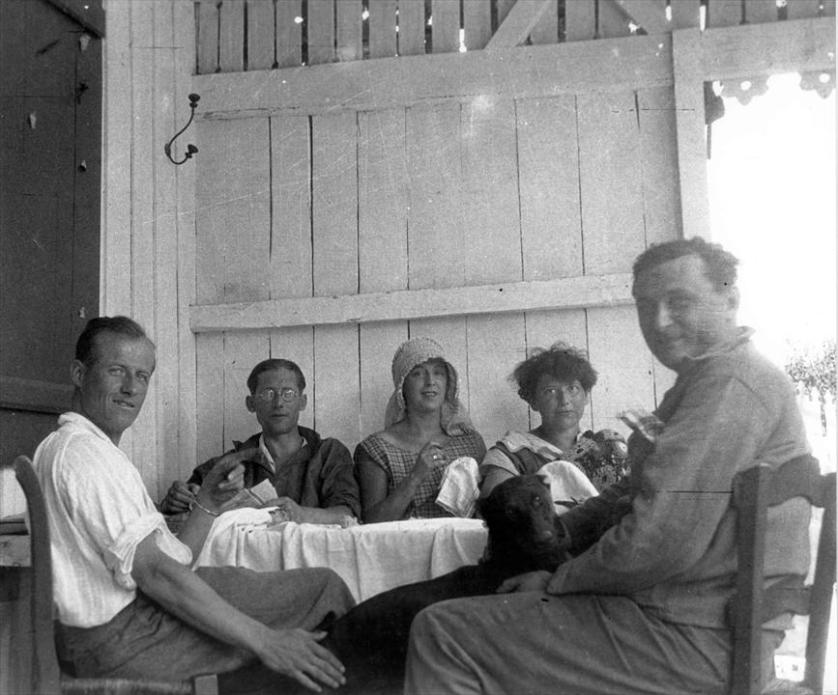 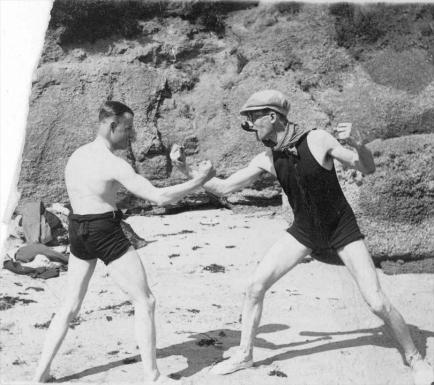 the cousins put their dooks up (c FLC)

Pierre started to work with his cousin in 1922 and together they set up ‘Le Corbusier: Pierre Jeanneret architects’ in a new office at Rue de Sèvres, gradually building up a team as more work came in. Unlike his cousin, Pierre had a formal architectural training in Geneva but you never have any doubt that Le Corbusier was in charge. Through the Twenties and Thirties they worked together on the startling works that defined the first part of Le Corbusier’s career – the Villa Savoye and other house designs, the huge schemes for the League of Nations  and the Palace of the Soviets (unrealised) and the Centrosoyuz office in Moscow. When Charlotte Perriand joined the office in 1928, the three of them worked on the tubular steel furniture that is again often ascribed only to Le Corbusier.

Pierre doesn’t seem to have minded that his cousin was the bright star. Le Corbusier was the man his clients wanted, the man with the biggest ideas, just as today’s clients want Norman Foster or Renzo Piano rather than just their teams. While Le Corbusier spent his mornings painting, writing or working on specific work problems in the peace and quiet of his home, Pierre was left to run the office and oversee much of the construction work. He had a meticulous sense of detail, which is essential in completing any building. Le Corbusier was a broad stroke, big picture man, restlessly moving on to the next project, not caring too much if there were flaws in the workmanship. When Le Corbusier told off his client, Hélène de Mandrot, for allowing shoddy workmanship in her house, it was left to Pierre to smoothe the ruffled feathers of a doubtless rather perplexed client.

When the Second World War started, the cousins split. Le Corbusier wanted work from the Vichy government, not so much because he agreed with their politics (or so I believe) but because they were in charge of new building projects throughout the country. So far as Le Corbusier could see, there was only one man up to the job of replanning cities or designing temporary shelters: Le Corbusier. It’s clear that Pierre had no desire to work with the collaboration government and made no effort to woo Vichy. In 1940 he tagged along with Le Corbusier and Yvonne when they moved to the hamlet of Ozon in the Pyrenees, after Yvonne’s health began to deteriorate in damp Vichy. When Le Corbusier went off to Vichy, Pierre kept Yvonne company or tinkered with a bicycle and he would often disappear for a day’s cycling. It was in Ozon that he decided to take up an invitation to move to Grenoble to work with Georges Blanchon producing temporary wooden buildings. The team there was also a cover for the Resistance and Pierre was an active member, issued with a gun. In so many ways, he achieved much more than Le Corbusier ever did during this period. 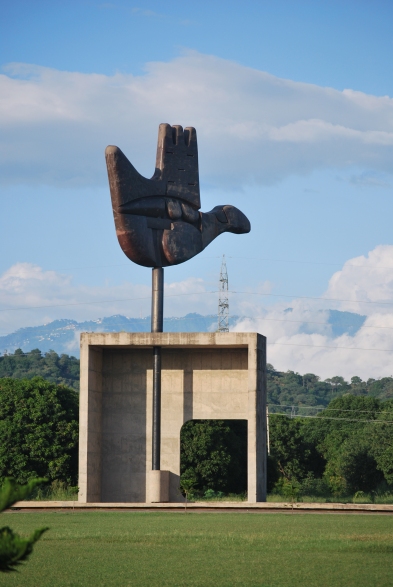 After the war had ended, the cousins reunited when Pierre was enrolled to help on the giant Unité d’habitation building in Marseille. In 1950 Le Corbusier landed the job to design the new capital of the Punjab, Chandigarh. Although Le Corbusier was in charge he wanted Pierre at his side. It was in Chandigarh that Pierre really seemed to shine, no longer in the shadow of his more famous cousin. When eventually Le Corbusier bowed out, having designed the main buildings – the Secretariat, the High Court, and adding his famous open hand sculpture – Pierre stayed on to design buildings for the university as well as a whole range of interior furnishings. They’re rather clumsy looking pieces, quite removed from the sleek tubular steel of the 1920s, and yet they say something for how Modernism was diversifying and leaning towards a less machine-made look. We see it in Le Corbusier’s own simple holiday cabanon of the same time, with its upturned whisky crate stools and rough-barked exterior, and even in the chunky walls of the sublime chapel at Ronchamp. It’s a return to nature. (For photos of his furniture – and for some lucky buyers – see: patrickseguin.com.) 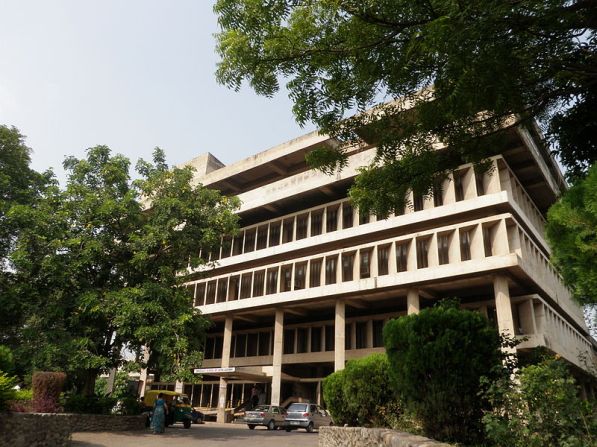 Gandhi Bhawan by Pierre (flickr Aleksandr Zykov), a place to study the work of Gandh

I’ve always found Chandigarh a hard place to love although I can only judge it from photos. New towns take time to settle in and I’m eager to visit but I fear Chandigarh will disappoint. I think it’s the way the spaces between the buildings seem simply too big and that the scrubbiness of the landscape doesn’t balance the raw concrete buildings – they need lushness. Perhaps it’s a different place after the monsoon rains.

Le Corbusier wrote often about the warmth of the Indian people and Pierre loved the country, too, staying in Chandigarh until ill health forced him back to Switzerland where he died in 1967. His ashes, though, were scattered on the lake at Chandigarh. His personal papers are now held at the Canadian Centre for Architecture but oh, I wish he had written an autobiography. 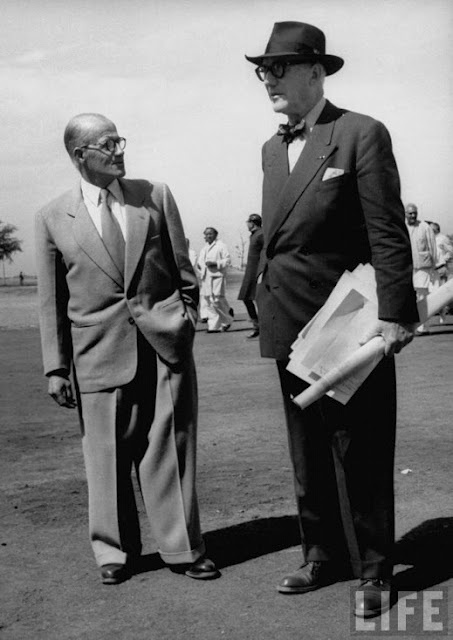 Pierre in massive trousers, with his taller cousin

In my novel, Le Corbusier treats Pierre in the impatient way a brother treats a sibling. At one point he calls Pierre ‘a drone’ but really, there’s much more to Pierre than that.

I’d love to know more about him so drop me a line if you can shed more light on the man.